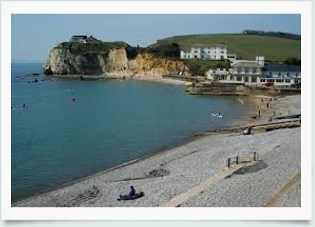 Freshwater Bay is covered in a mixture of grey flint and chalk pebbles. There is sand below the low water mark and sandy areas to sit to the more eastern side of the bay. A rock ledge is revealed at low tide which is great for rockpooling. The Freshwater Bay Café is one of the oldest Beach Cafes. There also also the Dandelion Café perched on the cliffs above the bay.